This is your dream, live it

This came to me while I was riding to church.
I admit, one of my favorite gospel verses is John 10:10.
I think that we get caught up in one upping every one, that we lose sight of the goodness that is quite literally left at our doorstep.
My Favorite story is about when George Gershwin went to Paris: he wanted to be a real classical composer. The only problem everyone he approached told him that he was wasting his money and that he should be the best Gershwin he could be.
But I'll let you be the judge
George before Paris:

Granted ,anything after you've come up with "Rhapsody in blue" is going to be a letdown, but still..
And this isn't saying to stand pat. I didn't really discover classical music until my late 30's, it about finding the approachable dream and improving rather than wait for that winning powerball ticket or its equivlant
Posted by Unknown at 2:59 PM No comments:

I'm sitting here reminiscing about all the times I've flown, particularly since I'm busy preparing for another flight.
The map represents all my commercial flights, as you can see , I do tend to gravitate towards one airport in particular. The only problems is that Lambert -Saint Louis is the worst kind of hub: an former one
You see once upon a time. there was this little company called Ozark Airlines:

And all was well and good, They even flew DC-9's to little old Podunk Cape Girardeau.
Then Airline deregulation happened. No more flights to the sticks on big planes. And the route of the swallows met this fellow named Carl Icahn, and it acquired a more famous name

by that time, It wasn't quite the "Trans World Airline". It continued until 2001, and the planes flying into "The Gateway to the West" Changed colors again:

Of course, the only problem was that American already had a hub in Chicago at O'hare. So they kept on subtracting flights until the hub was no more.
Which left me with a dilemma. You see, Cape Girardeau is about 150 miles south of the airport. You can still fly commercially there, but the service is now subsidized by the FAA. They restrict the Airline flying the route to one destination. The last carrier to fly the route only offered one flight a day,which never meshed with my schedule Since I live only two miles from the Ontario airport, I decided to save some money this time and fly the roundabout route (Atlanta going east, DFW going west) rather than drive to LAX and fly direct.
Well, The FAA didn't like the "one flight a day" Great Lakes offered, so they rebid the contract. The winner : the aptly named Cape (as in Cod, not Girardeau) Air. They offer four flights a day, but on older , smaller planes (Cessna 402 vs Beechcraft 1900). Amd they fly to and from STL. There was some talk about flying to Memphis, which is a Southern/Republic/Northwest hub, but it may wind meeting the same fate As Lambert under Delta.


And it sounds like it's going to be vintage plane week
ONT to ATL Boeing 757 (gee, I wonder which airline this is)
ATL - STL MCdonnell douglas MD-88
STL- DFW MD-82 (Wouldn't be surprised if the tail number ended in "TW" and it flew on the Route of the Swallows)
DFW -ONT MD-83 (once again, who says TWA is dead?)

Posted by Unknown at 7:32 PM No comments:

Truman is a Tiger


I was supposed to do the ride marshal for the tour de foothills this morning. Normally, I do the half metric option twice to get my weekly Dale Degemann approved metric.
But I had a sinus headache this morning. I almost didn't go . In the end I woke a and pedaled over to memorial park for the marshal's meeting

I then lined up for the start:

and we took off down foothill. The Upland had close the road for us:

once I had finished getting my kicks on Route 66, we went up Garey to Baseline and then up Benson to 21st. I had to make a stop at the park on San Antonio and took a picture of Telegraph peak:

I stopped at the official rest stop and socialized. I also spotted a quadruple bike:

Speaking of bike for multiple riders, Dan and I had to help this tandem team get their chain unstuck:

I had lunch and then ,since I still wasn't feeling good and needed to run errands, I left.
Now what about that Tiger?
Well. Wednesday, the weather forecast said it was going to rain. I could not find my umbrella, So I decided to get in the morning. Only Albertson's had put theirs away - The weather forecaster changed his mind. The clerk brought some out, but I saw something else that caught my eye.
By the way, it did rain - so I was right to listen to that little voice. So yesterday, this leaped into my cart:

And being from Mizzou-RAH! (actually, I pronounce it Misery), his name has to be Truman, despite the fact that his fur is not black and gold.
Posted by Unknown at 6:58 PM No comments:

I did the recumbent ride , and we didn't have that many, plus we did a familiar route, The pacific electric trail.
We stopped and chatted in Claremont:

and Eric had a flat in Montclair:


but everyone enjoyed themselves

I was think about the title for today's post, as I've discovered that Picasa will let you retouch your photos. You can do it manually, or if if you want the program to make the best guess, you click on "I'm Feeling lucky" 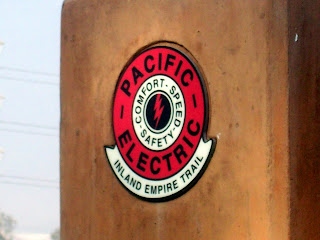 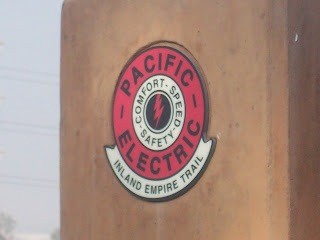 This got me thinking about how much we rely on technology to simply our lives. Moos of the time , it's good. I don't enough about photography to do as good as the picasa program does. But some thing may be lost - i was think about this one my ride today as I was doing "let's see where this street goes" - So the key is where do you draw the line.
And lucky does have several meaning - I'v started watching and enjoying pro basketball - alto ugh I find myself liking Los Angeles' "other" team - the usually hapless LA Clippers - only when I watch the games, they win, and I don't they lose.
Will this result in an email from Baron Davis and Mike Dunleavy to watch more games? probably not, but it does broaden my interests, and that's a good thing

Posted by Unknown at 1:54 PM No comments:

Since today was the starting of normal time, at first I was going to go up Mt Baldy so I would be prepared for Twain Berg's wild sierra Challenge.
But I it was not light early enough, or at least I didn't want to run my lights, so i did the Pacific Electric trail:

I rode out to Fontana, and then came back to my usual "pit stop":

During my pit stop I was serenaded by liz Tokalty:

coming home I stopped at the house under construction:

I then looped back thru upland from Claremont on its section of the Pacific Electric. I did check out the construction that is being done to link the Rancho and upland sections together:

I know your'e saying boring ride and boring music. But some time, the old stuff just works better.
I was thinking about getting a bigger tv for my old eyes. I didn't want to spend all that money all at once, and then I notice that KMart and sears still offer layway, so I went over there. Now to do some cogitating
Posted by Unknown at 2:08 PM No comments: