The Terrian of History

I was think about on Bike ride Saturday, as I was crossing the Santa Ana River:
and I since I've been working on My historical fiction , I've been thinking how people crossed the river without bridges. The Santa Ana is no big deal, but since my writing focuses on the early settlers of my Home county (That way I can Claim Cape Girardeau as well as Jackson) My character will have to cross the Mississippi. A slightly bigger Hurdle.
I 'm still working on how they did this. Most Native tribe kept Canoes at convenient locations and used a honor system to ensure that not all the canoes wound up on one side.
My Main concern with this was the Mississippi's Current. the Present day current is powerful enough that you will wind up downstream of where you planned. This was not as big of problem, mainly because Humanity has changed and Tamed the river so it more predictable and doesn't wipe State Capital on whim, like happened at Kaskaskia, where the church and the bell is all that is left, and it's now on the "wrong" side of the river: 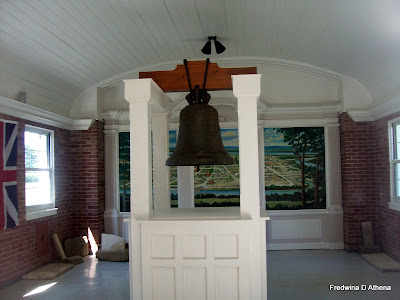 The river is now narrowed, deeper, and Faster.
And the land has changed , too. Most of the Original settler were Shawnees. Among was a young would become famous in the War of 1812: Tecumseh. He moved from Fort Wayne to Cape in 1788 from what is now Fort Wayne, Indiana. They largely followed the Wabash to the Ohio and then the Ohio to Present day Cario, Il and then up "the Father of the Waters"
Only My research showed that Tecumseh had an accident near Paducah, KY and broke his hip. He eventually walked the 60 miles form Paducah to Cape on Crutches (You don't me to give away the whole story. do you?) My question was why was on the Kentucky side? Not only the did the have to cross the Ohio, but also the Cumberland and the Tennessee.
we turn to history. Not was the Illinois side a swamp, but you may have noticed that I didn't say present day Paducah. That's because there was a Chickasaw Village there(Paducah is named for their Chief , Paduke ) and they probably would have stopped there to resupply, consider the only other spot where they could was Vincennes, IN and they may not had much luck there, as that was a Major US outpost at the time.
Just a reminder that we think is permanent, is indeed, Impermanent
Posted by Unknown at 7:55 PM No comments:

Honey, I don't think this is a bike blog 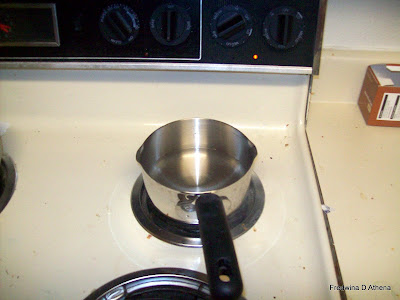 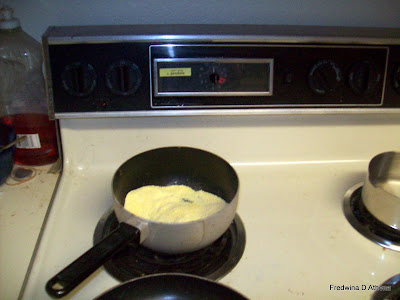 Ok, what's a picture of Boiling water doing in a bike blog? and yes, I need to clean my stove better.
Well, doing research and writing my novel, I found out about some traditional foods in early America. One of the food that people I am currently writing about, The Shawnee, passed on to us is Johnnycakes -which most people think is a mangling of "Shawnee Cakes". So I decided to little experiential research and cook up a batch.
The first item was cornmeal. No big deal. I headed over to Fresh and Easy. They had cornmeal in a 5 pound bag, which for me would be lifetime supply.
I managed to find a one pound can of Quaker at Wal-mart, so it was on again. The next question was what recipe to follow. A lot of them seem to be awfully modern ("mix water, cornmeal, and High Fructose Corn Syrup").In the end, I picked this recipe from whatscookingamerica.net. While I did question the milk (Cows were viewed as "big Knife", or Colonial animals) , I liked the touch of Bacon Drippings. No , Neither Fresh and Easy or Wal-mart had a can of Bacon Drippings. I guess I could have fried up a slab ("bacon Drippings" is the grease left over after frying) Since I would be using my trusty Whirlpool fire,. I Figured I could use PAM.
I combined the ingredients as specified, and then had a problem. The recipe called for the mixture to be fairly thick, but I had something the consistency of soup. I stirred in enough cornmeal to make it thick enough (I used yellow instead of white cornmeal, That must be it. right!) and then fried the results: 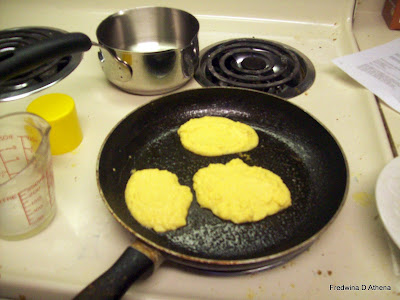 I garnished it with Low - Calorie Imitation Maple Syrup (plenty of HFCS there) and real butter.
The result: I haven't died. yet. It may be a little bland compared to our modern foods, and that my be part of our dietary problems, but still it was a good time for a good cause.
and just in case you need a bicycling fix:

Posted by Unknown at 6:04 PM No comments:

This is o road a lot of folk don't know about. it's right off Glendora Mountain road.
It wasn't quite as long, and I probably could have done more if I had went around the gate.
I've been blogging less and writing more. Maybe one day I'll get it done and published
Posted by Unknown at 5:53 PM No comments:


I did another of my old haunts, the ride up Cajon pass. It went O<
I tried the newest advance in sports nutrition. Meet Mr. Gum E. Bear: 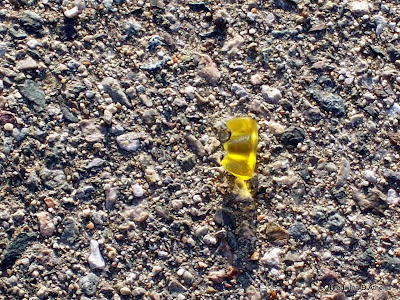 This house is on the crest by Glen Helen park: 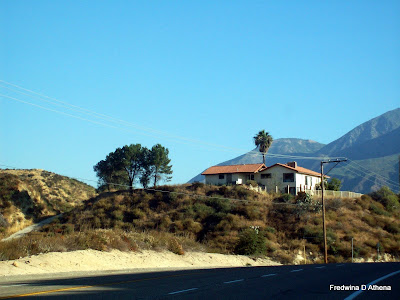 with Interstate 15 in the background: 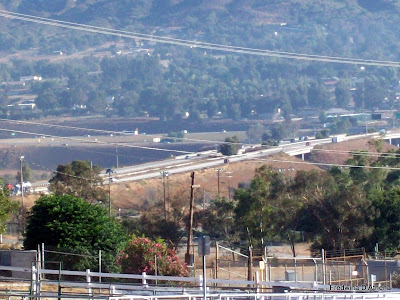 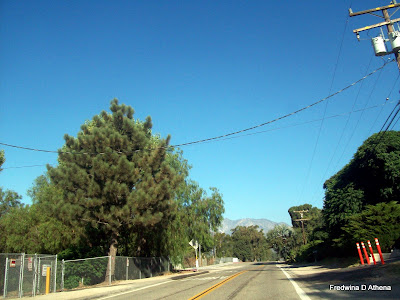 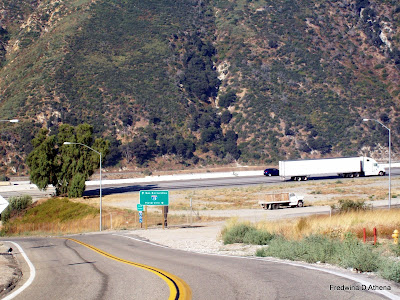 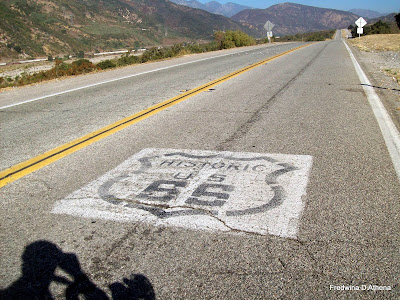 Route 66 is now just a lonely desert road with lots of differed maintenance: 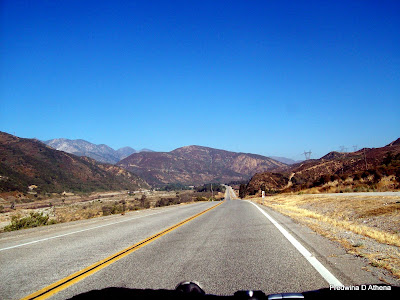 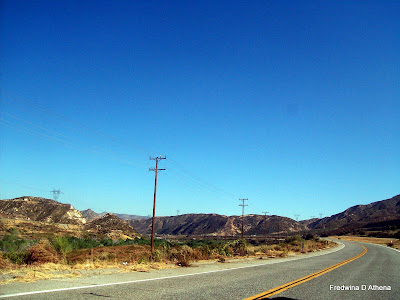 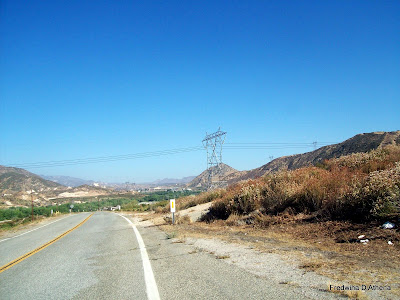 soon, I was where it merges into I-15, so I turned around:

I walk up the grade back into devore. I prefer to think of it as addition by subtraction.
Posted by Unknown at 2:34 PM No comments:

I decide to do a ride i've been planning for a while:

Thing did not start out well, as I ran over a needle. It took me about 20 minutes to get it out.
I made all the sights, only I couldn't spot the arrowhead. here's a better picture

all in all, a pleasant and enjoyable day. Not what you'd expect from san berdoo
Posted by Unknown at 6:31 PM No comments: