Well , this may not appear to be Bicycle Related at first
I was having problems with My Saris bones rack on my Ford Focus, and heck it seemed like every time I turned around I was putting money into it. And it's paid for.
I think had mentioned that I had some window shopping. Well Friday, I noticed that Citrus Motors had both a Kia Rondo and a Mazda 5 in stock via the Inland Valley Daily Bulletin. So I Loaded up the Giro and headed to the autocenter
Once I explained what I was up to , the Salesman, Jan, pulled over a grey Rondo:

We folded down the seats, aqnd the Giro fit without disassembly. Cool Beans! So we took off for a Test drive. Jan told to to drive wherever I wanted. We went to the Airport (it was an ex-rental) and back. And true to SoCal, the freeway Portion involved a Traffic Jam.
So we came back and tried a Mazda 5: 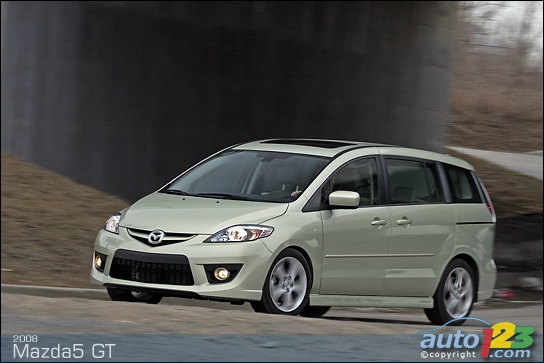 we pulled it up next to the Rondo and the focus. Things looked until we tried to fold the seats. Insert slot a into tab while picking your nose and humming the appropriate national anthem. Hmm, Those Mazsa engineer could learn a thing or tow from their Korean Conterparts.
We also looked at the Kia Sportage:

Not quite enough
So went across I-15 to the Honda dealer. I had mentioned the fit, Not in Stock. So we drove an Insight:

The first thing the salesman asked me was "what Can I do to put you in this Insight Today?" Umm, give it to me?
And I didn't really like it. The a/c would turn off when the motor shut off, I could'nt get the mirrors adjusted where I could see good enough, and I deviated from the official test course. So on to the Element(hey, I can find another dealer:

I felt like I was driving my cousin earl's semi.
Speaking of trucks, when I pulled in to the Toyota Dealer, The salesman said, "I know exactly what you need!" He produced a 2008 Toyota Tacoma with a Camper cap. The bike fit. unlike the honda dealer, where the bike did not get off the Bones

While I did the approach better, the price was little high, and I've never been good at bargaining for cars
I had thought about some more vechile, like the Saturn VUE, or the Dodge Journey. But , unfortunately, I ran out of time, and then you add in the Status of Saturn and Chrysler led me with a bit of a case of the willies (the VUE will go away, and I can the "new" Chrysler selling Jeeps, Trucks, and Fiats.
and then I was buying foreign again. Or was I ? yes, Kia is a Korean company, and the Rondo was manufactured there. But there US headquarters is in Irvine. And they do have US engineers on staff, a test track out in California City . Plus they are building a plant to assemble
the 2011 Sorento in West Point, GA. I though about waiting, but wasn't impressed by the looks of it. The car business is getting diffcult. Do I want the Ford made in Turkey, the Dodge that's actually an Alfa Romero made in Mexico or the Kia from georgia? And is the Rondo a car? or a Van? or a SUV? wait my registration says it's a truck
So I put myself in debt to Ford Motor Credit again today:


Next week: bicycling . Maybe!
Posted by Unknown at 5:05 PM No comments:

That was one of my first boss's favorite sayings.
Today, I had too many decision about where to ride. I decided to do the "three club" ride. It started out ok as I was on my own I rode down to lake Elsinore, and turned around here:

I rode back to the start and found a "ticket" on my car. I was only supposed to park there if I was shopping. Oh ,well, I don't guess I'll patronize that shopping center again.
The ride started out with a hill climb. Not wanting to give myself a heart attack or blow out my knees, I decided to do some walking. Eventually, I did catch up, by the riders I was with thought it was ok to blow every stop sign. Funny, I didn't think recumbents were allowed in Tour de france.
enough vingear. The main reason I cam was the old Norconian hotel

The Norconian was built in the 20's as a Grand Resort, went Bankrupt in the 30's, was Taken over by the Navy in 40's as a hospital, and given to the State in 60's who made it into a prison. The state gave it to the city of Norco, who trying to rehab. It's truly sad as it a beautiful building. I've had a chance to walk close enough to touch it when i've been on the Navy Part of the properrty. here's a good video:

after this I got lost! I decided to make my way back to the start via Hamner and Main, which was good, since I ran across the neat old house:

Thankfulkly, they did not tow my car, I had lunch and came back. Maybe I should have down the 180 century instead.
So I guess this where the Cowgirl rides away

Posted by Unknown at 3:11 PM No comments:

A tale of three rivers

We were going to do the San Gabriel River Today. I woke up early, and did a little bit of riding to find a bath room. I took a photo of a ship waiting to come in to the Harbor:

coming back , I came across this lawn sculpture:

He had the usual pre ride session before heading off up the San Gabriel:

hard to believe that you're only 10 miles from downtown LA:

Once we got to Whitter Narrows, some folks went back the way they cam most of us decided to go on to the Rio Hondo trial, which eventually becomes the Los Angeles River Trail.
we crossed over the Rio Hondo:

before coming to the Los Angeles:

Since the LA River trial goes Through Compton, I didn't feel like tarrying.
It was a little embarrassing , as most of the bikers go to Long beach well before the trikers. I busied myslef with my camera taking picture of the Port, the Queen Mary, and other things:

I got separated fro the Group in downtown Long Beach. but it allow to take picture of this pretty building:

One of the unique thinmg about long beach is that the offshore oil rigs are disgused as islands:

We eventually made it back. since I wound doing 70 miles instead of the 55 I had planned, I rewarded myself:

Posted by Unknown at 6:26 PM No comments:

I decided to go to the La county Fair today. I've been out for four years and it's only 10 miles away.
I noticed in the newspaper that if you brought five items of canned food from Ralphs Supermarket, you got in for free, so I made a trip to Ralphs'.
I was debating driving or taking the train. I decided on the train. it was a little late, but I soon a the entrance to the Fairplex. The train stops next to the drag strip:

Once inside, I had to find a bathroom, it was next to the Train station for Acradia (but i'm in Pomona!)

once inside, I was remind of My hair stylist's, Albert, opinion, that you should only visit the fair every 25 years. It was like the fair remember at home, The Southeast Missouri Fair, only writ larger. I was beginning to wonder if I had wasted my time. I consulted a map and arrived at the history area, but a little early:

I then went thru the National Hot Rode Association museum.:

not bad. I bought the Christmas present for my nephew, Chuck, and proceed to the Art Museum. I probably amazed my mom by not buying anything from the Museum store.
going to more modern cars, Toyota had a booth there, hmm, should I get a Pirus or a Matrix?
By then I was running out of things to do. The fair site does have some interesting art deco architecture

I decided to go to farm animals. I was debating if it was worth it. I ran into my friend, Karen Miranda, and we chatted for a while.
by then I needed to go back to the train, The fair has a couple of ski lifts, so I took them, I get motion sick real easy, so it's probably the only ride I could ride:

I decided to make a movie:

when I got outside, the tram attendant told there wasn't a train for a hour an half, and that I had read the schedule wrong, so I went inside again, I wondered through the Africa expedition and then, listening to my 80 year old stylist advice, took in a horse race:

Maybe I should have placed a bet. The winner had 80 to 1 odds:

There was also a Cal fire helicopter:

coming back, I was debating doing the Ferris Wheel. I deceided not to, but I when go to the train station, I discovered that there were no trains for an hour and half! I know i was right!
I also that there would more frequent service from the regular station, so I decided to walk there. I thought it was a mile. Turned out, more like two. Cross-training is good!
I got there just as a train was pulling in. It was standing room only, but still cut an hour off of waiting. Thankfully, I had bought a Souvenir cup:

Posted by Unknown at 6:31 PM No comments:

smoke gets in your eyes

Shared via AddThis
Well, I wasn't sure if I going to ride today due to air quality.
Then several folks started talking about doing a beach ride, so I decided to go with the Tri club, only except nobody from the club showed up.
But Brent Feller and his gang did:

We rode north on the Santa Anam, hoping to find them. We found Jennifer Suchey and her friend instead

We made to the beach in no time, probably because we averaging 20 mile an hour.

There was some debating about where to go to get something to eat, but I prevailed with my old standby, Newport Burger:


we made new friend:

and headed back , I gave Brent and his brother James a ride on my recumbent:


Then I went up to the end of the Santa Ana, which was probably too much as it was getting hot. This area burned in November 2008:

Until next week, keep safe!;

Posted by Unknown at 6:38 PM No comments: